Abstract: VirES is a server/client architecture to help access time series of Swarm data and models. Access is enabled through a token generated on the website, and a Python package, viresclient, which provides the connection with the Python ecosystem (e.g. xarray).

This tutorial introduces the Python interface to VirES, viresclient. We demonstrate usage of the primary Swarm magnetic dataset (SW_OPER_MAGA_LR_1B) and geomagnetic field models produced as part of the Swarm mission. Some knowledge of pandas and matplotlib is assumed.

Run this on the VRE (Virtual Research Environment), where viresclient is already installed, or check the instructions to set it up on your own Python environment.

In order to authenticate access to the VirES server, viresclient requires an access token - this ties communications between the server and the client to your account. If you are using the VRE, this is handled automatically so you can skip this step.

If you are running viresclient on a different machine, you will need to follow these instructions:

Your access token should now have been saved to your environment and you won’t need to provide it again. The token and its associated access URL are stored in a file: ~/.viresclient.ini (this file can also be edited directly). You may generate and set a new token, or revoke old tokens, at any point. These are similar to passwords, so should be kept secret - if you accidentally leak a token, you can revoke it at the token management page and generate a new one. It is also possible to set access tokens via CLI. For more information, see https://viresclient.readthedocs.io/en/latest/config_details.html

To remove the configuration (assuming you left it in its default location), you can use the CLI command: viresclient clear_credentials

Import the SwarmRequest object which provides the VirES interface, and datetime which gives convenient time objects which can be used by SwarmRequest.get_between()

The following code will fetch one day (i.e. around 15 orbits) of the scalar (F) measurements from Swarm Alpha.

Several keyword arguments can be provided to .set_products() to specify the type of data you want. The measurements available depend on the collection chosen in .set_collection(). The same set of auxiliaries are available for all collections - here we also choose to fetch the MLT - magnetic local time.

sampling_step="PT10S" downsamples the data to 10 seconds, from the MAGx_LR default of 1 second. If no sampling_step is provided, the data will be accessed in its original form (i.e. here, 1-second sampling). These strings to choose the sampling_step should be provided as ISO 8601 durations (e.g. "PT1M" for 1-minute sampling).

start_time and end_time in .get_between() together provide the time window you want to fetch data for - executing this line causes the request to be processed on the server and the data returned to you. NB: this returns data up to but not including end_time. Alternatively we can provide the start and end times as ISO_8601 strings.

The data is now contained within the object which we called data:

The data is temporarily stored on disk and not yet loaded into memory - the ReturnedData object is actually a wrapper around a temporary CDF file which could be written to disk directly:

… but it is possible to directly transfer it to a pandas.DataFrame object:

Try plotting some things to visualise the data. The following shows the variation in field strength measured by the satellite as it passes between high and low latitudes, varying from one orbit to the next as it samples a different longitude. 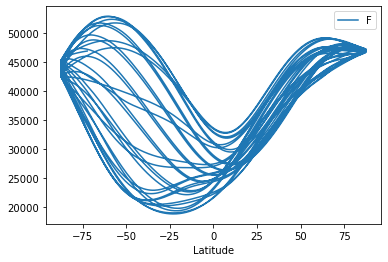 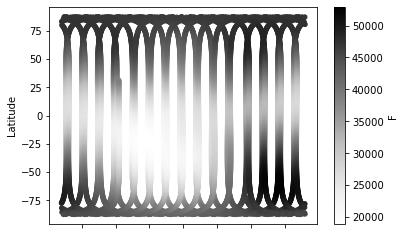 Various (spherical harmonic) models of the geomagnetic field are produced as Swarm mission products and these are available through VirES. They are evaluated on demand at the same points and times as the data sample points. Here we ask for the MCO_SHA_2D model, a dedicated core field model produced from Swarm data. By supplying residuals=True we will get the data-model residuals, named in the dataframe as F_res_MCO_SHA_2D.

The core field has been removed from the data so the amplitudes are much smaller. Can you interpret the new signals in terms of external fields, i.e. from the ionosphere and magnetosphere? 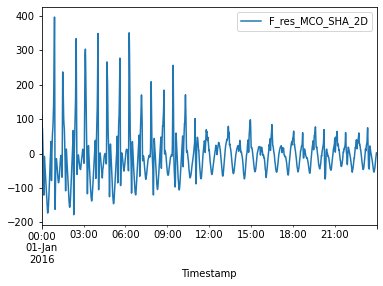 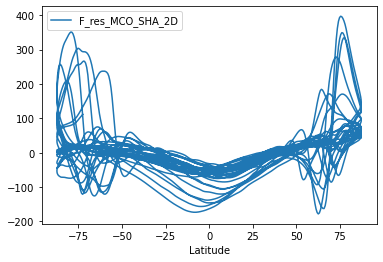 We can also remove a magnetospheric field model at the same time, by specifying a new model (which we call MCO_MMA here, but can be named whatever you like) which is the sum of core and magnetospheric models.

See Swarm_notebooks/notebooks/02b__viresclient-Available-Data for more examples of this - it is also possible to specify the spherical harmonic degrees (min/max) to use, and to provide your own .shc model.

The remaining signal is now primarily due to the ionosphere.

Note that here we are instead using the CI (comprehensive inversion) core and magnetosphere models (indicated by 2C in the product names). The magnetospheric model (MMA) is split into two parts - “primary”: external to the Earth, and “secondary”: the induced counterpart internal to the Earth. 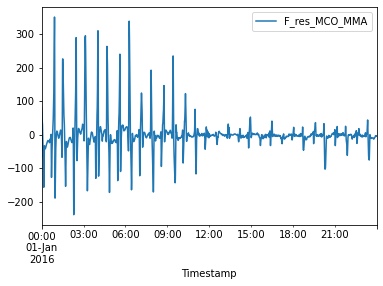 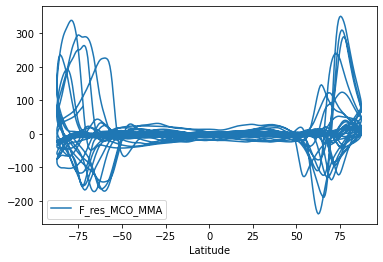 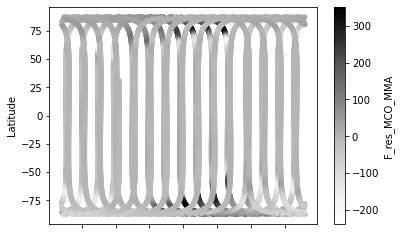 Intro to Pandas and Plotting